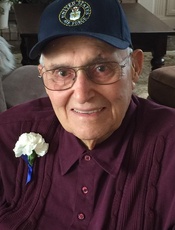 Joseph Cook was born on December 28, 1923, in Rochester, New York. He attended Franklin High School, graduating in 1941. After graduation he enlisted in the army, where he was a Sergeant Radioman/Gunner on the B-24 Liberator bomber in the 5th Army Air Corps during WW II in the South Pacific. When the war ended he went back to Rochester where he met and later married Catherine, his wife of 65 years, in 1949. He was employed at Kodak and eventually received his Associates Degree in Mechanical Engineering from Rochester Institute of Technology.

Joe was very active in his parish life and his community. He was an enthusiastic sportsman, playing many sports, especially golf. he eventually shared his expertise by coaching Little League, which he did for many years. He loved telling stories, especially of his experiences during the war. He had a wonderful sense of humor. And who could forget his one-liners!

After his wife passed away in 2014 he eventually moved to Kingwood, Texas to be with his daughter and family. During his time in Texas he was revived in community life where he felt loved, accepted, a sense of belonging, and special. He passed away peacefully on March 10 surrounded by his loving family.

Joe touched many lives in his journey on this earth with his honestl and integrity; his generosity and love of life. He was an inspiration to all who knew him. And his legacy will live on forever in our hearts.

Please enhance this tribute to Cook, Joseph E. by adding your condolences or memories. Click Here

A private family memorial service will be held for Mr. Martin On Tuesday, January 26, 2020 at 1 pm. Livestreaming is available through the Darst Funeral Home website.