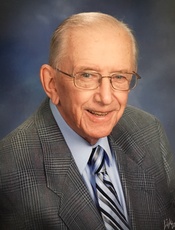 Dick was born in 1932 in Reading, Pennsylvania, to Evans and Marie Crosby. He graduated with a Bachelor of Science degree in 1954 from Penn State University, where he majored in Mineral Economics, played clarinet in the Penn State Blue Band, was a member of the Delta Upsilon fraternity and Phi Mu Alpha, and served in the Army ROTC. After graduation, he served as a First Lieutenant in the U.S. Army at Fort Lewis, Washington, until his honorable discharge in 1956. He was a member of the Free and Accepted Masons of Pennsylvania for 62 years, earning his 50-year pin in 2007 from the Isaac Hiester Lodge in Reading, Pennsylvania.

Dick had fond memories of his time as a traveling secretary for the Delta Upsilon fraternity after his discharge from the Army. He started working for the Continental Can Company in 1959. He retired from the Sonoco Products Company (Continental’s successor) in 1996. He enjoyed his retirement in the company of family and numerous friends, playing golf, bridge (as a Life Master), and poker; traveling as frequently as possible to far-flung places – whenever possible by train; volunteering at the Atascocita Presbyterian Church, where he was a founding member, elder, and deacon; reciting poetry masterfully for anyone who would listen; spending time as a loving father with his two children (and when possible his “grand-dog” Wasti, a rambunctious miniature dachshund); and caring devotedly for his wife Esther, whose battle against Parkinson’s Disease continues.

A memorial service will be held on Saturday, March 23, at 1:00 pm at the Atascocita Presbyterian Church, 19426 Atasca Oaks Drive, Atascocita, Texas 77346. In lieu of flowers, Dick would have been grateful for contributions to the financial solidity of the church, with donations earmarked in his name for the “Mortgage Relief Fund.” His family would also welcome donations in his memory to the Houston Area Parkinson’s Society, in recognition of the devoted role he undertook in caring for his wife, Esther.

Please enhance this tribute to Crosby, Richard E. by adding your condolences or memories. Click Here

A Celebration of Life for Ronnie will be on Saturday, October 23, 2021 in Kingwood, Texas at Darst Funeral Home in the garden from 11:00am-1:00pm. A Military Honors will be presented by the American Legion.

Please help us celebrate their lives at Darst Funeral Home, in Kingwood Texas, on October 23rd from 3PM-5PM.  Funeral service will begin at 3:30 p.m. with Deacon Nick Caruso officiating