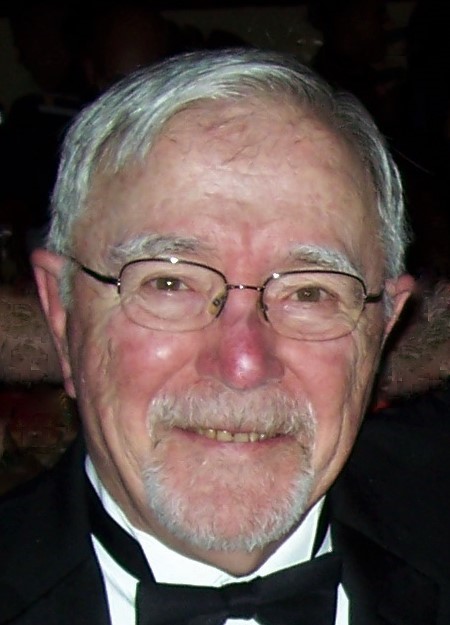 Buddy was born April 11, 1934 in Alexandria, Louisiana, the first child of Everett Benson Rogers and Zetta Robertson Rogers.  He was raised in Pineville and was a graduate of Bolton High School, Class of 1952.  At Bolton, he played basketball and baseball and lettered in both sports. He was also elected “Mayor for the Day” of Alexandria his senior year.  Buddy attended Louisiana State University in Baton Rouge where he was a two-time letterman in baseball.  He earned a dual Bachelor of Science degree in Petroleum and Chemical Engineering in August 1957, the second student to graduate in the then-new program.

In the fall of 1956 he approached a pretty redhead freshman girl drinking a Coke at the Field House Canteen on campus.  Her name was Glenda Jeane Stringfield.  They married on November 3, 1957 exactly one year to the day following their first date. They shared over 40 years together until her untimely death in January 1998. In March 2004, he married Linda List Currie. They were married for 10 years until her death in August 2014.

Following graduation from LSU, Buddy accepted employment with The California Company (now Chevron).  He began his career working offshore out of the Leeville, LA office and then was transferred to the New Orleans and Harvey offices.  In 1967, the company moved him to California where he was a part of the California Oil Field Research Company and later the Standard Oil Company of California. The family lived in Fullerton and Goleta, CA during their twelve years there. He retired from Chevron in 1979 to move to Houston to work for smaller independent energy companies.  Between 1979 and 1985 he was employed by TransOcean Energy, Houston Oil and Mineral, Howell Petroleum, Zenith Petroleum and Seneca Resources.  In 1985, he founded Texas Mastr Pump, a business he continued to run until just days before his death.

Buddy continued his life-long love of baseball coaching youth and Little League teams in New Orleans, Fullerton, and Goleta.  He was a life-long Methodist.  He taught Sunday School for many years, mostly to junior-high age students. He served on many Boards and Committees and was the Lay Director of the Methodist Youth Fellowship Program at Orangethorpe United Methodist Church in Fullerton, CA where he had a strong positive influence on youth in the 1970s. Most importantly, he was a supporter of all of his children and grandchildren’s needs, interests, and activities always finding a way to arrange his schedule to be there for them in whatever way he could.

Buddy was preceded in death by his parents Everett and Zetta Rogers, wife Glenda Stringfield Rogers, wife Linda Currie Rogers, and dear nephew Sean Rogers.  He is survived by his daughters Jeane Rogers, and Kathy Rogers Mayeux and her husband Gordon, all of Kingwood, TX; sons Everett B. “Rett” Rogers, III and his wife Terry of Lansing, KS, Tim Rogers of Oceanside, CA; granddaughters Kathryn Mayeux of Kingwood, TX, Becca Mayeux Foster and her husband Chris of Montclair, VA, Amanda Mayeux of New York City, NY; grandsons Everett B. Rogers, IV and his wife Gabrielle, and Anthony Rogers all of Leavenworth, KS, Andrew Rogers of Lansing, KS; great-grandsons Cooper and Lucas Foster; the “two best brothers he could have ever asked for”, Paul Rogers and wife Sophia of Sturbridge, MA and Jim Rogers of Huntingtown, MD; two nephews, four nieces, their spouses and children/grandchildren and more cousins than can be counted. Also left to cherish his memory are Linda’s son’s Scott Currie and his wife Patty of Humble, TX, Sean Currie and wife Theresa of Kingwood, TX, and John Currie and his wife Gretchen of Round Rock, TX, and their children. And also the wonderful women that cared for him the last months of his life, Loria Edmonds, Jessica Marshall and Violet Ceasar.

There will be two funeral services to honor, remember, and tells stories about Buddy.  The first is Thursday May 9, 2019, 11:00 AM at Kingwood United Methodist Church, 1799 Woodland Hills Dr., Kingwood, TX 77339.  Visitation is 9:00 AM to time of the service.  There will be a reception with lunch to follow at the church after.  The second service is 11:00 AM, Saturday May 11, 2019 at Hixson Brothers Funeral Home, 2701 Military Highway, Pineville, LA 71360. Visitation is 9:00 AM until time of the service, followed by interment at Pollock Cemetery.

To view and submit images or to sign the guestbook, visit www,mem.com/8274101

Please enhance this tribute to Rogers Jr., Everett B. by adding your condolences or memories. Click Here

Buddy Rogers, he was my good friend. Although we never met in person, we spent years speaking on the phone and via email while I worked at Elastec. A story teller he was! I sure miss talking with him and heartbroken to hear of his passing. May god be with his family during this time. He was a special man!

I'm so sorry for your loss Jeane, Kathy, Rett, Tim and all of your families. Alsoto all of your stepbrothers and their families. He was a wonderful man and he will be really missed. Love Amanda and Ken