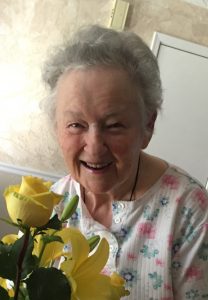 Alice Marie Kana Neiman was born March 25, 1929 in El Campo Texas. She is the fourth of five children born to John and Matilda Kana. As a teenager Alice was an excellent softball player and entered in numerous local beauty pageants. After graduating from high school she attended Wharton Junior College in Wharton, TX where she learned the skills that would benefit her in her career. Alice moved to Houston in her early 20’s where she worked various jobs to support herself. Several years later she would meet Vernon Neiman an insurance executive from Houston. On October 7, 1956 they were married. On October 5, 1962 Alice and Vernon adopted Gerald Scott Neiman, their only child. Alice enjoyed being a housewife and also working various temporary jobs eventually becoming a full time employee at Exxon Coal and Minerals, a division of Exxon as an Executive Assistant.

Alice and Vernon enjoyed traveling the United States as well as overseas. One of their favorite activities was going to the horse races at different tracks in Louisiana. A HUGE sports fan Alice and Vernon had season tickets to the Houston Cougars football and basketball teams. But the Houston Astros are truly Alice’s favorite team. Alice also enjoyed off-road motorcycling, snow skiing, fishing and camping.

After 15 years with Exxon, Alice retired and she and Vernon moved to their beloved property in Centerville, TX. There they enjoyed the quiet and slower life of small town living, raising cattle and hosting their grand children in the summer. After Vernon passed away in 2006, Alice moved to Kingwood to be close to her son and his family. Alice has one son Jerry and his wife Kathy, four grandchildren, Jocelyn, Thomas, Jacob and Melissa. And 5 great grandchildren; Lilli, Ben, Andi, Abbi and Guy.