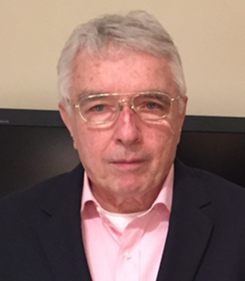 He was a beloved husband, dad, grandpa and brother. He had a lasting impact on his family and on hundreds of journalists he worked with in a 35-year career as a reporter and editor at The Detroit News.

He told stories of celebrities and popes. But he also wrote about the lives of ordinary people and was particularly fond of journalism’s watchdog role, keeping tabs on government officials and monitoring abuse of power. He was a key editor on a series of stories about state government spending abuses that won The Detroit News a Pulitzer Prize for beat reporting in 1994.

He traveled the country and the world as a reporter, covering the funerals of two popes, the troubles in Northern Ireland and the criminal trial of Ford Motor Co. after the fiery crashes of its subcompact Pinto.

He found himself part of a story in 1978 when he was sent to a Wyandotte, Michigan, bar to interview an armed man holding patrons hostage. After listening to his story, George escorted the gunman, who had ordered free drinks for all of the hostages, out of the bar. But he made sure he talked to the man inside the bar long enough so that his competition at the Detroit Free Press would miss its morning edition deadline.

George discovered his passion for journalism at Michigan State University, where he graduated from the Honors College in 1971 with a bachelor’s degree in journalism. He started working at the State News in 1968, eventually becoming editor-in-chief of the nation’s then-largest student newspaper. To his delight, the job included a campus parking permit for his 1963 Thunderbird.

“Journalism,” he once wrote, “is like swimming nude. It’s hard to explain why it feels so good.”

Even after retiring from The Detroit News in 2006, George wrote “Raging Bullard,” a politics blog for the paper. He also freelanced for numerous other publications.

In 2009, he was honored in the State News Hall of Fame. Former Detroit News editor Jim Gatti wrote, “George was the most complete journalist I knew during my 31 years in the business. There is nothing one-dimensional about George and his career. His capacity to bring home the story, regardless of circumstances is remarkable – whether covering the creation trials in the South, the selection of a Pope in Rome, corruption of government, an airline crash in Detroit or a trend in the auto industry. His work is always marked by intelligence, wit, insight and unflagging energy.”

He shared that wit, intelligence and energy with his family, who benefitted greatly from his generous spirit.

He is survived by his wife, Susan; his daughter, Lisa (José) Aguilar; his son, Kevin (Leigh-Golding DeSantis) Bush; his grandchildren, Emilio, Alina and Lucía Aguilar and James Kibert (Kai) DeSantis-Bush; his brother, Bernie; his cousins, Mary Trudeau and Laura Sanborn, whom he considered sisters; his mother-in-law, Claudia Burzynski; and numerous nieces and nephews.

He loved spoiling them all, particularly when they spent time with him at his beloved house on Lake Huron. He was a man of many hobbies, but one of his favorites was piloting his pontoon boat on the lake.

Over the years, he also enjoyed ham radio, model trains, aquariums, wine-making and tinkering with just about anything. He was a technology early adapter, often buying and experimenting with the latest electronic devices. He also earned his pilot’s license and flew his Cessna 150 – sometimes just to have lunch in a different part of Michigan.

A perfect afternoon for George often involved multiple trips to the hardware store. He taught himself to weld in his retirement so he could make steampunk art. After moving to Texas, he tried mastering the perfect ribs in his latest gadget – a smoker.

George was born in Middlesboro, Kentucky, to Frances and George K. Bullard in 1945. He was raised in Appalachia, Virginia, and St. Petersburg, Florida. After graduating from Northeast High School in 1963, he joined the U.S. Army, rising to the rank of Specialist 5 while serving in South Korea.

He worked briefly in labor relations for Ford Motor Co., before discovering his love of journalism at Michigan State.

He spent much of his adult life in Michigan before moving to Nebraska in 2008 so his wife could teach at the University of Nebraska-Lincoln. There, he continued to dabble in journalism, mentoring student journalists at the university.

In 2018, he moved to Kingwood, Texas, to be closer to his grandchildren and to be treated at the M.D. Anderson Cancer Center in Houston.

He was a member of Kingwood Christian Church.

George was known for his generosity. He particularly liked to help in ways that he could see an impact directly.

In that spirit, he asked that contributions in his name be made to fund teacher projects at Humble Elementary School in Humble, Texas, where two of his grandchildren attend school and his daughter, Lisa Aguilar, is a teacher.

Tax-deductible donations can be made via this link: https://www.donorschoose.org/donors/search.html?includeNearbyLocations=true&school=15035

Please be sure to click on “dedicate this donation” and contribute in his memory.

We'll celebrate George's life with a memorial service at 11 a.m., Monday, Aug. 26, at Kingwood Christian Church, 3910 W. Lake Houston Parkway, Kingwood, Texas. It will be followed by a reception in the church's fellowship hall. At 2:15 p.m. that day, he'll be buried with military honors at the Houston National Cemetery, 10410 Veterans Memorial Drive, Houston. Arrangements are being handled by the Darst Funeral Home.

The world was a better place with George in it. I will miss you, cousin- brother.

Reading George’s story makes me proud to be a journalist. They don’t make ‘em like that anymore … and they never will. Sue, thanks for sharing George with us. And thank you for our talks and time together. Enjoy the memories … they’re great ones. Those will get you through.

All of us were so fortunate to have George in our lives. George will truly be missed by everyone! Love you brother George

May the Angels Welcome him to Paradise. George was a great brother-in-law. He will be missed. Shelley and Steve Job

Hello everyone. I’m Jim Stewart and as the lawyer for the Deteoit News I worked very closely with George when he was the assistant Managing Editor in the early 90’s. If there was anyone who had ink in his veins ,it was George. Perhaps more important Geroge was a true and loyal friend through thick and thin. George wa also a true character who enriched all of us who knew him. I had sent Sue a number of my fvoritey George memories for his 70th birthday and will not repeat all of those here. If I know George he’s been working his new beat since last Friday and already has some copy started. Truly a wonderful guy.

George & Bernie my
nephew. Will never forget you and your
families.Sorry we were living years apart Ky Mi Tn Fla.
and Neb. Sue a wonderful wife & family.

Will miss you cousin