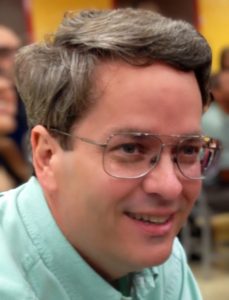 Michael John Keady lll died on March 18, 2020, from a massive coronary. He was born on April 30, 1967 in Houston, Texas. John was a very caring person. He is survived by his loving wife, Marianne Keady and his two children, Rachel Annette Keady and Michael John Keady IV of Houston, TX. He is also survived by his parents, Michael John Keady Jr and Annette Keady of Kingwood, TX, sister Ann Elizabeth Keady and her two sons, Jacob Shawn Key and Kaden Michael Key of Prosper, TX. He is also survived by his aunt Kathleen Dalton and her husband Gene of Georgetown, TX and his uncle Richard Keady and wife Joyce of New Braunfels, TX and several cousins. John was preceded in death by his grandparents, Mr. and Mrs. Michael John Keady, Sr. John was employed by FiServ until recently they were merged with another company. He was studying to be certified in Cyber Security.
The family wishes to thank all of the doctors and the ICU nursing team of Memorial Herman NE, for their compassion and their diligent and focused endeavor to help the Keady family during this crisis.

“If you love me, even a little bit, let me know it while I am living so I can treasure it.” This family loved John deeply and we all told him this until his last breath. What a privilege it has been to have you in our lives.

Love and miss you my brother! Rest In Peace now.

Annette, Mike, Family. our most heartfelt and sincere condolences to the entire family. May God’s peace and love surround and envelop you..may his memory be a blessings… Baldemar, Naomi, Eric and Mark Tonsul

John, you will be missed by so many. You touched alot of lives. You and your whole family are in our thoughts and prayers.

I met John at Kingwood High School and went to UT with him . Even though we weren’t in close contact after UT, I always had the highest respect for John. I always admired his amazing ability to speed read books in hours that took me days.

John and I went to Kingwood High School together but more than that over the years we were more like Brothers than friends. John was always quick with a smile and would always have time for you.
John and I hung out playing card games late into the early ours on the morning and had the best times. We even worked at the same place for awhile Lone Star College but they could not handle the duo of Charles and John so John elected to move on to another Job. That did not stop us from hanging out, or meeting for lunch, or trying to hookup for online gaming. Neither one of us liked that stye and much preferred online gaming that put us in the same house on computers right next to each other so we could laugh, joke and converse and of course gang up on the other folks online that thought we were not sitting right next to each other.
John was a once in a life time friend, You know the guy that was going the same way you were and willing to help you get where you wanted to go. The world is a less happier place with out you my friend.
I Love and miss you John Keady III Rest in Peace Buddy
P.S Save me a seat to your left at the Nuclear Proliferation card table buddy. Team Charles and John was aways the winning combo.

John was a perfect friend; we spent time together, and his lovely wife, Maryanne, and kids on New Years, and again at Creekwood event for Veterans Day were his son Michael sang choir. John was a great guy. Many years ago, I remembered playing ping pong with him at his home in Kingwood Lakes, where I met his lovely sister with her curly hair and his little dachshund dog. We spent time together playing card games, and even when I got caught cheating, John never got mad. When he was working at Luna’s restaurant, he would hook me up with free food. John was a good man and a good friend always in a good mood. If I were picked up the phone and asked for help, he would be there even though I would ignore his calls for a “chair move” when he moved out of his apartment. John was an avid reader with thousands of books I didn’t enjoy reading, but John got my started reading giving me books he knew I would like. I left for the Army and 26 years and moved back to Kingwood in 2017, where our friendship renewed. John, you have been the best of friends John you will be missed.

I remember John as a handsome and brilliant little boy who served as ring bearer in our wedding. He was very capable of beating his dad at chess and excelled at reading in school. Whenever we visited he was always polite and cheerful which made him a requested waiter during his young adult years at a Mexican restaurant.
John, you are sorely missed!

opens in a new windowGoogle Reviews

opens in a new window