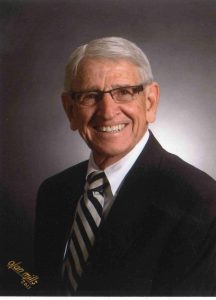 Richard Wayne Fowler, a devoted Christian, was called home on June 4, 2020, at 12:30 am. After struggling several years with Alzheimer’s.  He resided at the Landon Ridge Senior Living in Kingwood, Tx for the last three years.  He was cared for and loved and became a cherished family member to all the residents and associates.  He will be remembered for his smile, which was a treasured response and reflection of his joyful sweet personality and his strong handshake.

Richard was welcomed into life to his parents, V.W. (Victor) and Lillian Stroup Fowler on October 4, 1935 in Elk City, Oklahoma.

Richard started his work career early in life.  In 1948 he took a newspaper route position at the Borger News Herald.   According to a news article at the time Richard “earned enough money from his route to buy many of his clothes, school supplies and paid for many of his living expenses”.  He worked hard and saved his earnings knowing he wanted a higher education and to attend college.  He succeeded and attended West Texas State University (West Texas A&M in Canyon, Tx).

Soon after his time in Canyon, he traveled to Colorado, where he completed his military police training at the Provost Marshall Generals and entered the Army at Fort Carson, Co.  He honorably served his country as an MP K-9 with his dog, Shep from 1958 to 1960.

Richard married Mary Jean Tadlock on December 28th, 1958 in Borger, Tx.  They lived in Northern California where their two daughters Robin Renee and Richelle Randee were born and raised.  He was a horse enthusiast and his hobby became a big part of the entire family.  They shared many memories and experiences traveling to horse shows throughout California and Texas.  Richard was a very active member (President in most) in several community associations including local Chamber of Commerce and Rotary Clubs where he lived.   While living in Antioch, he was awarded the prestigious Paul Harris Fellows Award and received many other awards over the years. He was a faithful member and Deacon of his Church and participated in many organized nonprofit organizations.

Richard continued to work hard, mostly in multiple levels of banking and finance.  He started as an entry level teller and was quickly promoted to top management.  He spent over 20 years applying his talents and expertise with several large financial institutions while in California.  He then returned to his childhood hometown to open and operate a savings and loan in Borger and Amarillo, Tx.

Richard and Mary Jean moved in different directions but kept in touch with each other and remained friends.  In time Richard found love again with Becky Knowles Hanna, who he married in Lake Tahoe, California on September 15, 2001.  They lived in Amarillo and continued to work together owning and operating several small businesses over the next 12 years. Richard’s family and grandchildren were on the top of the list of what mattered most.  He lived to make sure they had what they needed to succeed in life because he believed that a man provides for his family.

He enjoyed life to the fullest, not only with his grown children but his grandchildren.  He would spend hours playing with them, teaching them, telling them stories, sharing his experiences, and giving them love and guidance. Richard led a full life and was a man you could sit and talk with about anything and everything or just have a fun conversation.  After spending time with him, you would walk away inspired, uplifted, and knew that he was there for you.

Richard was a wonderful husband, father, brother, grandfather, uncle, and friend.  He is preceded in death by his parents, Victor and Lillian Fowler, grandson, Alexander (Alex) Fowler and nephew, Randy Hager.

“I have fought a good fight, I have finished my course, I have kept the faith:

Now there is in store for me the crown of righteousness, which the Lord, the righteous Judge,  will award to me on that day – and not only to me, but also to all who have longed for his appearing.” 2 Timothy 4: 7-8 (NIV)

Arrangements have been provided by Darst Funeral Home of Kingwood and invite family and friends to the Graveside services on Thursday, June 18 at 10:30am at the Houston National Cemetery.  Immediately followed by a Celebration of Life at 4502 Brook Shadow Drive in Kingwood.

Due to Covid-19 Pandemic, the cemetery requires each person’s wear a mask during the service, and in addition, have requested that at the conclusion of the service that guests do not linger and promptly return to their vehicles.

In lieu of flowers, the family has asked donations/contributions to be given in Richard’s name to the Alzheimer’s Association or to First Baptist Church of Amarillo.

Richard was one of my best friends. Our families spent many wonderful times together. Rest in Peace and walk with God.

It is with deep sadness I hear of Richard’s passing and that he and his family had to navigate Alzheimer’s over these past years.

As I remember Richard I pray that you Becky, his wife, and children and grandchildren find comfort in the joyful memories and the love strength and and comfort of our Lord Jesus Christ 🙏🏻😇❤️

Just wanted to offer my sympathy for the loss of such a wonderful sweet man. I knew him from FNB and remember his kind smile and love of life