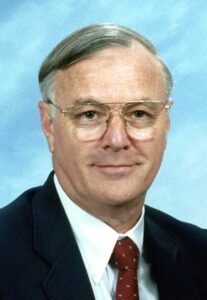 After graduating high school he served with honor and distinction in the Navy from 1964 through 1970, stationed on the USS Daniel Webster.  He met his soul mate, Julie Wessinger while in the Navy and they were married March 22, 1969.  By his words, serving in the Navy instilled him with a sense of duty and tremendous self-discipline which enabled him to complete an Electrical Engineering degree at Clemson University in less than 4 years.

With an EE degree in hand, he was offered a position with Exxon doing everything from mechanical to fluid related engineering work in New Orleans, LA and Houston, TX.  Together with his wife, he found his first calling as a Sunday school teacher for younger children at First Baptist Church in Humble, TX.  In the mid-80s he moved the family to Midland, TX and worked as an operations superintendent and then eventually managed a regional computing shop.  While in Midland he developed a passion for cycling.  He rode long distances through his 60’s and completed several MS-150s and other charity related rides.  He also discovered snow skiing which became a regular winter activity.

After an extensive career with Exxon Mobil, he retired but in his typical fashion, was unable to sit still.  He did two more stints of consulting work before switching full time to his second calling with Texas Baptist Men.  With Texas Baptist Men he participated in numerous volunteer projects all over Texas doing new construction and remodeling work for church camps supporting ministry to all ages.

He is survived by his wife of 51 years, Julie, son Mark, daughter Maribeth and grandchildren Alexander, Benjamin and Cody; sister Anne Pierce, sister Bobi Hahn, as well as many nieces and nephews.  He was preceded in death by his parents Bob & Ruth Apperson.

He will be honored in a celebration of life on Saturday, August 1st, 2020 from 10-11 AM at Second Baptist Church in Kingwood immediately followed by a reception.

To view and submit images or to sign the guestbook, visit https://www.mem.com/9290348

One condolence on “Apperson, Patrick T.”

So sorry to hear about Pat. He and Rocky were on the Daniel Webster together. Then Julie and Mildred worked together. What develops does was a wonderful relationship. You and your family are in my prayers .