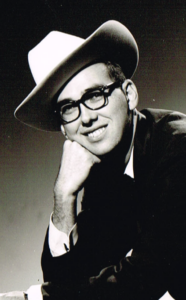 Walter Blaney, also known on the stage as Zaney Blaney, was a proud native Texan who stood at 6’6”.  He was born in Dallas on February 11, 1928, the son of William H. Blaney and Harriet Silvus Blaney. Walter attended Woodrow Wilson High School and obtained a Bachelor of Fine Arts degree in Theatre from the University of Texas in Austin. Developing an early fascination of the magical arts, he started performing as a magician during his college years. During those same years he met and married the love of his life, Joyce Lottie Sefcik. Together after graduating from UT in 1949, the couple began traveling the entire country with Joyce assisting Walter performing magic for school assemblies. With Houston’s booming economy, the two decided to settle in south Houston near Hobby Airport in Glenbrook Valley on Dover Street. He and Joyce had three daughters: Becky, Carol and Shannon. Walter was a devoted family man and developed a huge circle of friends. An avid Republican, he eventually made a run for congress in 1968.

As a master showman, Walter’s career took him around the world performing for various cruise lines, numerous conventions, banquets and trade shows. Walter was best known in the magic world for his own creation of the floating lady illusion. Though there are many methods of presenting the classic illusion, Walter’s original version fooled even the magic fraternity for over a decade. His Texan style of presentation and wit combined with his originally conceived magic brought him great praise and recognition all over the world. He was invited to appear on many national and international TV shows including, The Tonight Show with Johnny Carson, The Merv Griffin Show, The Michael Douglas Show and The Dinah Shore Show among many others. He was also commissioned by six Texas governors as Texas’ Ambassador of Goodwill. Walter also received many distinguished magic awards over the years including:

Walter continued to perform well into his 80’s and was well loved by the magic community. He was preceded in death by his wife Joyce in September of 2007 and will be deeply missed by his surviving family members: daughters, Becky Blaney and husband Bruce, Carol Blaney and husband John, her children with Tom Northrop: Shannon Northrop and Chris Christy, Shannon B. Keeler and husband Monty, her children Alex Keeler and his wife Meghan, Van Keeler, and Mallory Keeler and two loving-practically-family-members, Timothy Drake and Dan Summers.

In lieu of flowers the family asks that memorials in Walter’s name are to be made to:

One condolence on “Blaney, Walter E.”

Sorry for the loss of your dad. We lived next door and enjoyed watching his tricks and playing with his daughters. We send our prayers.