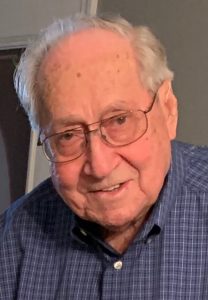 JAKE PETER ST. PHILIP, SR.
February 25, 1923 – November 26, 2020
Jake Peter St. Philip, Sr. also known as Jake, Daddy and Popo suddenly passed away on November 26, 2020 after a brief illness. He will be greatly missed by his loved ones, neighbors and friends. He truly was a friend and loved one to all that knew him.

He is survived by his son, Jake Peter St. Philip, Jr., wife Peggy and devoted daughter, Patricia St. Philip Gallagher, husband Jim. His lasting legacy is the amazing family he has left behind; nine Grandchildren, twenty-two Great-Grandchildren and ten Great-Great Grandchildren who loved his “Popo Kisses.”

Jake was a veteran of the United States Army serving in the European theater during WWII. After his discharge from the Army, he remained there working for the Army as a consultant and singing at USO Clubs where he loved to entertain. It was there in Iran that he met the love of his life, Wanda Rozkres, who immigrated from Poland during the war, and they married in Iraq in 1946.

Jake gave up his singing career after he and Wanda returned to New Orleans. He was a graduate of Samuel J. Peters High School and Delgado College where he became an electrician for the Local 130 Electrical Workers Union. His career spanned many years and he was very proud of his work as General Electrical Superintendent in the construction of the Louisiana Superdome. He retired from the IBEW and subsequently had a prolific career in real estate in New Orleans.

Jake and Wanda moved to Kingwood, Texas when he retired in 1997. Although a proud, native New Orleanian, he grew to love his home and friends in Texas. He greatly valued his relationships with his community and friends in Kingwood Village Estates. The relationships he had over the years were meaningful and deep. He was a member of St Martha’s Parish in Kingwood and his 23 years in Texas were great years for him and his family.

Jake had many hobbies. His greatest was he loved to garden. He grew the best tomatoes and herbs as he would quickly tell you! He was an avid lifelong New Orleans Saints Fan and lived to see the Saints win the Super Bowl in 2009. He loved watching the Houston Astros too. One of his last memories was watching the New Orleans Saints defeat the arch rival Atlanta Falcons on Sunday afternoon just a few days before passing.

Funeral Mass will be LIVE-STREAMED at:
www.stmartha.com Click on: Watch Mass Live

Dear Uncle Jake,
You were always on my mind and I enjoyed our phone conversations over the years; I hadn’t called in the last year because Henry and I didn’t want to burden you with the news of our sister, Elizabeth’s, death. I wish you well on your soul’s journey and hope you meet up with your brother and my Daddy (gone almost 50 years). Likewise, I wish your children, Jake and Patricia, peace and comfort as they grieve.
Love,
Your Goddaughter, Catherine

So sorry for your loss. Happy he got to live his life so independently. He was blessed with longevity and a wonderful family. May you find comfort in the memories. May he Rest In Peace..🙏🏻

I always felt blessed for the family I had you are with them now singing in heaven! I can’t believe that I was blessed even more having you all of these years knowing this day would come but very hard to accept but it was your time. You will always be on our hearts JC,Sarita

I was very saddened to hear of your passing! You’ll truly be missed by all, and I’ll especially miss our conversations about you, my Dad and relatives, who have long since passed. Now you’re with God and family!