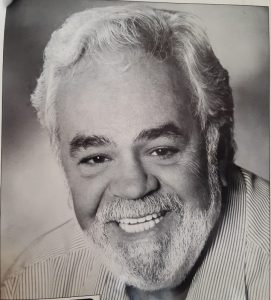 Vincent Joseph Abata went to rest in eternal peace with his Lord on December 26, 2020. Vic was born in Rockeville Centre, New York on February 29, 1932. He was one of three children born to parents Joseph J. Abata and Mary Abata (Fagella). His former years in education were supported by the Salesians Brothers of Don Bosco in New York, N.Y. He entered the military as a young man and proudly served his country in the U.S. Army during the Korean War. Vic earned his GED early which enabled him to study at Columbia University and graduate with a Masters Degree in Education. After graduation, he worked as a teacher for the New York City Schools and was a member of the Board of Education. In 1957 he married Patricia E. Burns, the mother of his 5
children. They were divorced in 1974. Vic went to work at Humboldt State College Elementary School teaching fourth grade and moved his family to Eureka, California in 1964. While in Eureka, he became active in theater; directing, acting, and producing plays for his classes and for the Burl Playhouse. He was awarded a “Harvey” award for the best supporting actor in 1967. Vic and his family moved to Santa Rosa, California in 1970 where he went to work as an Educational Consultant for the Sonoma County Office of Education. He remained with SCOE until his retirement. Once in Santa Rosa, he became a regular actor with the Santa Rosa Players where he performed at various venues, including the El Rancho Tropicana and the Performing Arts Center for over 20 years. His performance as Tevye in “The Fiddler on the Roof” in 1983 was among his best. Throughout the 1990’s, he delighted children with his annual holiday season cameos as Santa Claus as he floated up the Petaluma River aboard a paddleboat. On July 30, 2005 Vic married the love of his life, Antoinette Dupuis-Abata, and relocated to south Texas where they shared a loving home. He lived out his remaining years, “happy as a clam.”

While Vic’s history provides a framework for his life, it doesn’t fully capture who he was and why his loss has left a hole in the hearts of those who loved him. He grew up in poverty and raised his 5 children with strong values; encouraging education, hard work, and resourcefulness. He possessed genteel manners and was a gracious host who always kept his guests laughing and entertained. Tim Conway and Harvey Korman skits made him howl with laughter. He loved beauty in all its forms. He was proud of his Italian heritage and he loved to cook Italian food, singing and talking in a heavy Italian accent much to the delight of observers. His spaghetti sauce will be dearly missed. He had a great sense of humor and always had a witty remark. He was known to carry a small bag filled with packets of his favorite sweetener and other various condiments neatly rubber banded together. He liked order and cleanliness. He took pleasure in simple things like his morning coffee sipped from a delicate cup, his fragrant rose garden, and taking his orange MGD Midget for a spin. He could be fierce when angry but he had a forgiving heart. He loved deeply and treasured the friends he made throughout his lifetime. He was a gentleman and his spirit will live on in the memories of those who loved him.

Vic was greeted in Heaven by his brother George Abata, sister Rita Moskal, and his son Mitchell Abata. He will be dearly missed by his loving wife Antoinette, and by his children: Deborah Abata, Valerie Clapham, David Abata, Sheila Nordgren; grandchildren: Ashley, Anthony, Brianna, Leif, Soren, numerous great-grandchildren, his step-daughter Rebecca Stedman and her husband Roland, and their sons Reese and Gabe Stedman and stepson Vincent Rooks.

In lieu of usual remembrances donations may be made to the Disabled American Veterans nonprofit.

A beautiful soul, tender heart, and the funniest man I have ever known. Vic you brightened our days with your stories. You always had a smile on your face. We will miss your birthday parties but every year I will always think about my leap year baby. I’ll miss your singing and performing. I’m starting to cry so I will stop. You were the real deal my friend. I love and miss you tremendously. I am sad but knowing you are in the arms of our Heavenly Father brings me great comfort.

What a beautiful tribute of an amazing man! I am so thankful for the time I got to spend with him at Sarah Care. He filled our days with dancing, singing, and lots of jokes and laughter. He will be dearly missed.

While I never had the opportunity to know Vic as intimately as those blessed to have walked alongside him for substantial period/s of time, what I did come to know was Vic’s warm smile he always wore and the kindness shared whenever he was engaged with others in his family or community … love was being exchanged from both Vic and those who were embracing the moment. Most revealing of all, for me, was the love he had for my dear Aunt “Toni” (aka Antoinette), whose love for Vic was wholly reciprocated and seemed always on the path of growth in GOD’S agape LOVE. There was always a sense of respect, and appreciation, common purpose and yes, even romance … equally caring one for the other so that I felt theirs was a profound love which began and ended at the footstool of OUR LORD! Equally yoked is what Christian marriages seek to establish and then nourish … nurture so that it remains strong, healthy, exciting … This I felt was what Vic shared with Aunt Toni! And while I understand the great loss my dear Aunt is walking through during this season of grieving, I also understand the great faith that will sustain her in knowing Vic is walking with OUR LORD in HIS BEAUTIFUL KINGDOM. We who believe can find comfort in Jesus’s words in John 14:2-4 … ” 2) There is more than enough room in my Father’s home. If this were not so, would I have told you that I am going to prepare a place for you? 3) When everything is ready, I will come and get you, so that you will always be with me where I am. 4) And you know the way to where I am going.” Praise GOD OUR FATHER for HIS Love and reassurance that gives comfort and peace to we who are awaiting our departure when we will be rejoined with those we love! God bless you Vic … and GOD bless those of us awaiting our reunion! Amen! Amen! and Amen!

My heart goes out to my precious Aunt Toni and my dear cousins Rebecca, Roland, Reese and Gabriel. We loved Vic as did our Mom, Norma. We always enjoyed his quick wit, his charm, his hospitality whenever we visited in Texas and his ability to make our Aunt Toni laugh and be so happy. He is and will be greatly missed. We offer our deepest condolences to the family and all of his children and friends. We pray you are resting in peace with our Abba Father in The heavenlies.