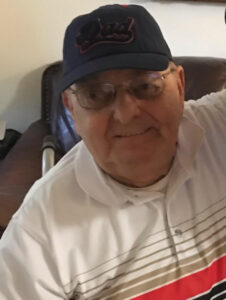 Charles Joseph Wagner, born on November 27,1926 passed away peacefully on August 25, 2021 with his wife Rose by his side.

Charlie, or Charl as his wife Rose often called him, was born to Frank and Elise Wagner who emigrated to America through Ellis Island in 1923 from Clausen, Germany, and settled in Jersey City, NJ. Charlie and his late older sister Rose Parniske (Wagner) grew up in Jersey City and he and his sister attended St. Bridget’s Catholic School. As a young man he loved roller rink dance skating with his sister Rose. A bright student, he graduated high school in two years at the age of 16. His initial plan was to go to college, but he wanted to join and serve in the US Army, where he also learned to play the Bugel.

After the Army, and a brief career with AT&T in New York, Charlie began a 40-year career in Traffic Management and Logistics in the Shipping and Transportation Industry. He served as Managing Director overseeing incoming and outgoing tractor trailers of merchandise to the shelves of retailers all over the country.

Charlie met his wife Rose at a friend’s party in 1950. Rose and Charlie were married April 19, 1952. Charlie remained an adoring, devoted and loyal husband for 69 years to his beloved Rose.

Charlie often applied his traffic management skills of navigation to his family road trips pouring over maps and road atlases for just the right route. He was the kind of dad who practically drew up a blueprint to pack the family car for vacations to go to the Jersey Shore, Disney, Niagara Falls,

Canada and frequently to visit extended family in Michigan. He loved taking pictures with his super-8 camera then hosting slide shows of our vacations on a white sheet as the screen in the living room.

In 1972, Charlie and Rose took their first dream vacation to Hawaii. In 2003 Charlie journeyed back to Germany to visit cousins he remained in contact with through letters over the years. He was amazed at how sharp his German speaking remained. His cousins came from many parts of Germany to meet Charlie Wagner from America. This was a highlight for him at the young age of 73.

Charlie was a very likable, charismatic, outgoing, silly, funny, and well-liked guy. Charlie was a real jokester with a sharp sarcastic wit. He spoke and understood German and some Italian. Charlie had a comedic talent and could come up with imitations in several languages when telling his many jokes and stories. When he was stationed in Brooklyn in the Army, he often joked that “His war” was “The Battle of the New York Subways!” Charlie always had a new joke to share and opted for laughter even in times of great sadness. He had a wonderful sense of humor. A hopeful optimist, whose glass was always half full, he loved surprising his children, and always encouraged us to see the humor in everything, to be disciplined, organized, punctual and patient.

Active in his community, Charlie was a lifelong member of the Knights of Columbus, longtime President of the Holy Name Society and a member of the American Legion. Charlie also loved big marching bands and helped organize the annual St. Patrick’s Day parade every year. He was an active member of

St. Aloysius Church in Jersey City where all three of his children attended school.

Sight impaired by astigmatism Charlie volunteered for the Blindman’s Association, often taking the family on day excursions, outings, and picnics at the Camp for the Blind. Charlie’s commanding voice as a coach and civic leader and volunteer made him a natural caller-voice for Bingo which he performed weekly in the community for many years, into his 80s and 90s at his independent living facility.

Charlie came of age during the height of the 1940’s and 50’s New York Big Band era. He enjoyed Glenn Miller, Benny Goodman, and Tommy Dorsey. He would take his “Little Rose” dancing often. Charlie’s love of music and dancing permeated our household, where he proudly shared his extensive Decca record collection. Charlie loved to dance so much that learning to dance the Lindy & Jitterbug was a prerequisite in the Wagner family.

Charlie loved growing up in New Jersey and loved New York City. He shared his love and pride for the city whenever his family from Germany or Michigan visited. We enjoyed the annual tradition of the Macy’s Thanksgiving Day Parade, and Radio City Music Hall. He loved musical theater and often surprised his kids with tickets to Broadway Musicals.

Charlie loved baseball and was an avid New York Mets fan. He knew Baseball history and could tell you about every team and the players past to present. We have many fond memories of trips to Shea Stadium. He once took his only son Chuck out of school early one day to go to the 1969 World

Series game. He surprised him with box seats and a visit to the dugout for a baseball signed by the 1969 Mets.

A devoted and protective father, Charlie was always at the table every night to share news about the day, watch baseball, play catch, or just sit on the front porch after supper. Charlie was also a baseball coach for the Lincoln Park Little League were we spent memorable time at practices and games at the park. He tried out and placed his youngest daughter Elise as a short stop on the team, making her the first girl to be on the little league team in 1974.

In 1991, Charlie retired, and he and Rose decided to move south to Texas to be near to their first and only grandson Addison who became his pride and joy.

Charlie continued dancing well into old age until he fractured his femur while dancing in 2017. A strong and feisty fighter he overcame several health obstacles in his 94 years.

Charlie had many loving relationships in New Jersey, Michigan, Florida, Germany, and since moving to Texas in 1992 he made wonderful new friends that also became extended family. Charlie was a devoted, loving husband, father, and dear friend who will be missed by many.

*Our family would like to thank our wonderful extended family and friends for their love, friendship, kindness, and support during this time of loss. We are so very grateful and happy you all met and enjoyed time with Our Dear Old Dad-Pops “Charlie.”

*Our heartfelt gratitude to the entire staff of Vista Nursing Home, and Resolution Hospice for the loving, kind and compassionate care you provided our father over the past months

Charlie, I don’t know how your Mets are doing, but I know you do. I can imagine you watching the games from Heaven. Your humor along with your baseball knowledge will be greatly missed. Lynn, Mike, Addison, and the rest of the family, you are in my prayers. Rose, I’ll say special prayers for you.

Imet Charlie years ago.We shared being Met fans together.Charlie would always tell me the same stories over and over.Which is funny,because his does it too.Sweet guy is all I could say.Not many like him anymore.He will be missed.RIP charlie!

My dear Godfather Charlie always called me his “Goombie” which was his play on an Italian word which I don’t even know but it always made me feel so special. That’s what Charlie did. His personality was huge and he was so fun to be around. I’m so glad my dad and Charlie were such good lifelong friends. He made a difference in everyone’s lives who knew him. Rest in God’s peace my Goombie❤️

What wonderful memories that you have from such a loving family upbringing of love and closeness with the Lord. Sending our prayers for peace and strength at such a hard time.

My sincere and heartfelt sympathies go out to all who know and love Charlie. I never had the joy of meeting him, but my world is much richer from knowing his beloved daughter Elise. Thank you, Charlie!

Though I never met Charlie, it was a genuine pleasure to learn of him by way of his remarkable and talented daughter Elise. I’m sending sincere condolences to all who loved him.

Phil and I met Rose and Charlie coming off the train in St. Augustine, Fl. and we were getting into a cab and waved over to us and asked if they would like to share our cab. We were all celebrating our Honeymoon being married on April 19. They had not reserved a place and they found a place 2 units away. We enjoyed our 2 weeks Honeymoon with them. We rented a car and went all different places together. We kept in touch over all these years, and even visited with each other 2 or 3 times. But the letters and cards come over the years. They were a great couple and we
enjoyed hearing
from them. In her notes she always mentioned her family and the grandchild, Elise the artist, Lynne who lived nearby, and Chuck who lived in North Jersey. We hope to continue our notes with Rose and our family. Our thoughts and prayers are with all of you. blessings to all of you. Phil/Lee