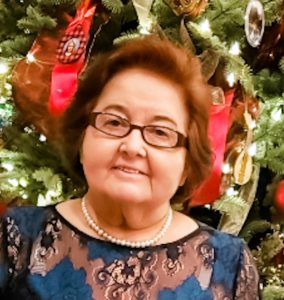 Dorica Maria Scobercea was born in Romania on January 1st, 1949 to Dr. Ilie and Maria Arcan. The oldest of two daughters, the other being Stela, she attended the University of Timisoara and received her degree in Accounting. After marrying George Scobercea, a mechanical engineer, in 1969 she began working for the Timisoara Bank of Investments.

In 1983, she immigrated to the United States and settled in Chicago, Illinois with her husband and two sons, Sebastian and Razvan. A third son, Andrew John, was later born. She became a proud American citizen and worked as a data entry supervisor for many years at IB Diffusion. She was especially proud that two of her sons followed in her father’s footsteps and became doctors.

Once her career ended she began assisting in the raising of her six grandchildren, James, Lucas, Eleanor, Charles, Lucy, and Catherine. Her sons, daughters-in-law, and grandchildren were her greatest joys. An amazing cook and baker, she enjoyed feeding her entire family as often as possible, especially around the holidays.

She was very active in her local Baptist church and even served as the President of the Women’s Ministry of the Romanian Baptist Association of the United States and Canada. After the entire family moved to Houston, Texas in 2007 she continued as an active member of her local church.

Her family will miss her food, her smile, and her love. A fighter to the end, she was truly one of a kind and can never be replaced.

Flowers can be sent to the church on Friday, January 7th.

A funeral service will be held at the Romanian Baptist Church on Friday, January 7th, 2022 from 7 PM-9 PM. Burial will follow on Saturday.

Please accept our deepest and sincere condolences! We are saddened by Dorica’s passing and pray that The LORD JESUS CHRIST will keep you in HIs perfect Peace and matchless Comfort in this difficult time!
Dorica will NOT be forgotten! Her pain and suffering are now gone!
Even though she left a void in many hearts, we still HAVE the LIVING HOPE that we are blessed with through the written promises of GOD for ALL and everyone of His beloved children!
Be comforted and reassured that the LORD keeps His Precious Word he gave us to trust and believe in!

Please accept our sincere condolences for the passing of our dear Dorica. Despite the distance, our hearts weep with you. We pray that Heavenly Father will strengthen you, and the promise of the resurrection in Christ will be your comfort.

Dorica Scobercea, will be remembered by many sisters in Christ of few Baptist Churches where she was a member, together with her nice family, George, her 3 boys and her daughters in law and her beautiful grandkids.
Sisters of Bethel Romanian Baptist Church, Park Ridge, Illinois, wish those related to her, sincere condolences, peace in your hearts and our Lord comforts.
We prayed together, sang together, suffered together, work together , keep our churches alive, with the help of our dear Lord Jesus Christ. Where was work to be done, Dorica was there. Her specialties cookies and cakes, are unforgettable. As a main point, she was always with George.

“But those who trust in the Lord will find new strength. They will soar high on wings like eagles. They will run and not grow weary. They will walk and not faint.” Isaiah 40:31
Dorica was that courageous lady because she trusted the Lord. She was not afraid of cancer, but fought back. She was not intimidated by Covid, but continued to worship the Lord with her church. Psalm 27:4-5
She was not slowed down by brutal treatments, but stayed busy, tirelessly cooking and baking for her entire family, whether holidays, birthdays, or just regular Sunday diners; or for the volunteers building the church; or knitting hundreds of hats and scarfs, gifts for the people attending the church inauguration, the hospital staff, or her family, cousins, nephews, nieces, and friends. Her door was always open and her table ready, as she would gladly feed anyone in town.
As Ms. Capota so well put it: Where work was to be done, Dorica was there!
She did all these things cheerfully, because she loved to serve the Lord and the people. Just like my mom, she knew where to build her treasure. Mathew 6:20-21
She was a blessing and my rock in times of trials and loss. Somehow she would find a way to give me hope, encouragement and even make me laugh. And when all that failed, we would cry together, then pray together, over the phone… She was not just my cousin; she was my friend, the sister I never had, my lifeline which kept me afloat, and so, SO much more! She was all heart, a rock of faith, with the energy of 10 Energizer Bunnies, and a positive, upbeat attitude, regardless of what she had to endure, never complaining, never wavering.
Dearest Dorica, I will forever miss our time together, your sweet voice chirping joyfully in my ear. But most of all, I will miss your comfort and prayers for me and my kids. “Now is my time of grief, but I will see you again and we will rejoice, and no one will take away our joy” in heaven, where there is no pain, no tears. Meanwhile, I’ll keep our daily chats going and your memory in my heart until we meet again. Sleep peacefully angel, and for the last time: I LOVE YOU!

I was sorry to hear your lovely mother passed away. She was such a delight every time she came to the lab. I am praying for all of you that your many memories will ease the pain of this difficult loss.