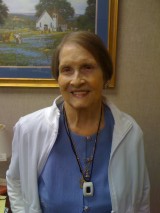 Barbara Ann Burris was born on October 27, 1936 in Jasper, Texas to Johnny and Clara Y’Barbo.  She passed from this life on Sunday morning, March 15th and stepped into glory.  She is preceded in death by her parents and her husband, Howard Ray Burris who passed away in 1993.  She is survived by her only son, John Burris of Kingwood, his wife Jenny Burris and her only grandchildren Jenna Burris and Jackson Burris.

Barbara spent 38 years as a school teacher in Newton and Beaumont.  However, her teaching went far beyond the classroom.  She had a lasting impact on many students who still count her today as an important influence on their lives.  People were drawn to her because of her warmth and genuine concern for others.  She tirelessly lived out the biblical admonition to “consider others better than yourselves.”

She had a warm friendly smile that was engaging to others and often found herself to be a listening ear to anyone’s trials, often ignoring her own.  The legacy she leaves behind is that of a teacher who used more than the knowledge found in books, but in the simple act of loving people for who they were and allowing them into her life.  In that way, she never really stopped teaching.  She allowed her faith to be lived out in plain view for all to see.

A visitation will be held on Tuesday March 17th from 6 pm to 8 pm at Kingwood First Baptist Church at 3500 Woodland Hills Dr. Kingwood, Texas 77339.

The funeral will be on at 10:00 am Wednesday March 18th at Kingwood First Baptist Church with graveside services held later in the day at Little Hope Cemetery in Jasper, Texas.

For more information about the life of Mrs. Burris, to sign the online guest book, or to offer your condolences or fond memories of Mrs. Burris to the family, please visit www.DarstFuneralHome.com

To view and submit images or to sign the guestbook, visit http://www.mem.com/6363399

Funeral: A funeral service was held on 2015-03-18 at Kingwood First Baptist Church. Graveside Service will be in Little Hope Cemetery in Jasper, TX.

Please enhance this tribute to Burris, Barbara by adding your condolences or memories. Click Here

A visitation will be held on Monday, October 26, 2020 in the Darst Funeral Home Gardens from 11 am until 12 pm with a funeral service to follow at 12 pm.