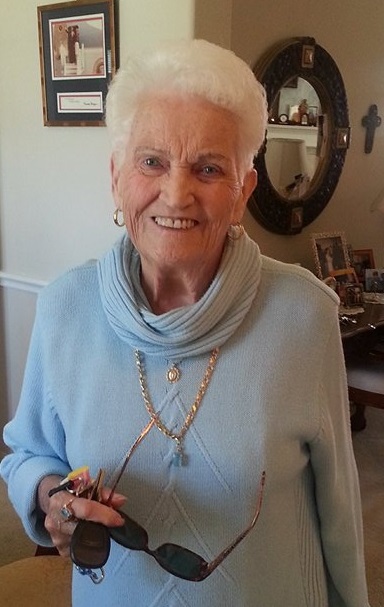 Mary Theresa Callahan was born April 22, 1930 in Bayside, New York to Henry and Mary Stanley and went to be with her Lord Saturday, November 25, 2017 at the age of 87. Being named after the Blessed Mother Mary and Saint Theresa the Little Flower, she lived up to her namesakes in her devotion to the Blessed Mother, Jesus and prayer. Her rosary was her constant companion and she prayed it often, enjoying the uncanny ability to smell roses whenever she prayed to Saint Theresa the Little Flower. Mary Theresa was generous to a fault with her time and prayers and became known for her ability to get prayers answered. She was the driving force behind starting “prayer warrior” Prayer Chains at both St. Mary Magdalene and St. Phillip Catholic Churches as well as a guiding light in the beginning of the prayer warriors at St. Martha Catholic Church. She was a lifelong member of the Catholic Daughters and was Past-Presdent of the Women’s Guild at St. Phillips and taught Sunday School for many years. In her younger life in Midland, Texas, she was a youth leader spending much of her time as a CYO sponsor.

Mary Theresa loved to make others laugh and smile and she celebrated life every day, bringing a feeling of sunshine to all around her. Her passions also included playing Bridge or engaging in a great round of golf with friends, of which she enjoyed having many. One of the greatest passions she enjoyed was being a wonderful mother to her seven children and a great wife to her husband Bill which was aided and made better by twenty-eight years of sobriety. God is good!

She is the youngest of six siblings, who all predeceased her. She is survived by her husband of 65 years, William J. Callahan; seven children, William J III, Bill (Deborah), Marybeth (Rich), Maureen, Cathleen (Michael), Francine, Michael (Denise), Peter; TENGrandchildren, Will, Richard, Nick, Michael B., Kevin, Patrick, Megan, Cailey, Erin, Michael Patrick; two Great-grandchildren, Evan and Lyla, and many other relatives.

Visitation with the family will be five to seven pm Thursday, November 30, 2017 at Darst Funeral Home with a Rosary to be recited at 6:30 pm. A Mass of Christian Burial will be celebrated 11:00 am Friday, December 1, 2017 at St. Martha Catholic Church followed by a reception in the narthex of the church. Interment will then follow at 1:00 pm at Rosewood Cemetery in Porter, TX. For those desiring, the family suggests memorial contributions be made to: the Gabriel Project at St. Martha’s

Please enhance this tribute to Callahan, Mary T by adding your condolences or memories. Click Here