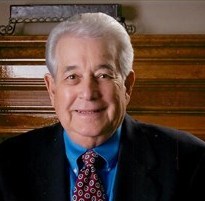 Paul passed away on March 25, 2014 in the comfort of his home in Kingwood, TX.  He was born on January 25, 1928 in Key West Florida and grew up in Miami where he met his wife Sue.  They were married on February 4, 1949 and remained married for 65 years.  In 1954 he moved with Sue and two kids, Michael and Cathy to Medicine Lodge, KS where his second daughter, Jana was born.

In his early years Paul was an outstanding athlete and played semi-professional baseball.  He also competed for the world championship in Jai Alai and was a golden gloves boxer.

He loved golf and played in numerous tournaments.  Paul carried a single digit handicap until his late 60’s.  He was in the oil & gas business in his early career and switched careers to maritime insurance adjusting in his later years up to his retirement at age 79.

He enjoyed traveling with Sue and they saw much of the world over their lifetime.  He will be loved and missed by all who knew him.

In Lieu of flowers please make a contribution to the American Heart Association, Kidney Foundation or SPCA.

To view and submit images or to sign the guestbook, visit http://www.mem.com/597268

Please enhance this tribute to Castello, Paul by adding your condolences or memories. Click Here