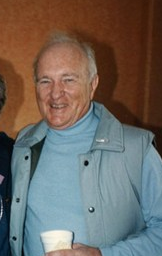 Clifford Wayne Childers was born September 26, 1924 in Carterville, Illinois, to Lula and Paul Childers and passed away on October 27, 2012 at the age of eighty-eight. Upon graduating from high school at the age of 16 Wayne attended Southern Illinois University and earned a Bachelor of Science degree (1947). Wayne continued his education at Columbia University in New York City where he earned a Master of Arts degree (1949). His Masters diploma was signed by Dwight D. Eisenhower during his tenure as President of Columbia University. Wayne finished his graduate work at the University of Illinois where he earned a Doctor of Philosophy in the field of physical chemistry (1952).

During World War II he served in the Navy from 1943 through 1945 aboard Landing Craft Support Ship #102 as a communications officer. Wayne’s ship participated in the famed ‘picket line of Okinawa’ serving as a first line of defense for American troops and naval ships besieging Okinawa during the final stages of the war. The LCS #102 is the last surviving ship of its kind and is on display at the Mare Island Historic Park near San Francisco, California.

Wayne began his carrier as a research scientist with Passaic, New Jersey-based U.S. Rubber (later Uniroyal) in 1952. While there he was awarded six patents in the field of polymer chemistry from the United States Patent and Trademark Office. Wayne accepted a research scientist position at Phillips Petroleum Company in Bartlesville, Oklahoma in 1963. Wayne was awarded 16 patents during his 22 year career at Phillips. Wayne served as chairman of the American Chemical Society chapters in both New Jersey and Oklahoma.

Wayne was active in the Boy Scouts of America, and served as both a Scout Master and Neighborhood Commissioner for many years. He enjoyed volunteering at the food pantry run by the Humble Area Assistance Ministries.

In 1950 he married Mary Ann Wells Childers, and in September of this year they celebrated their sixty-second wedding anniversary. They have two sons, David Wayne and Laren Paul, two daughters-in-law, Marsha and Beth, four grandchildren, Chris, Laura, Anne and Lance, and one great-granddaughter, Presley. Wayne is survived by his brother Don Childers of Corvallis, Oregon.

Wayne was a member of Christ the King Lutheran Church (3803 West Lake Houston Parkway Kingwood, Texas 77339). A celebration of his life will be held at the church on November 3, 2012 at 10:00 am. The service will be followed by fellowship and light refreshments.

In lieu of flowers, please make a contribution to the food pantry run by Humble Area Assistance Ministries, or the charity of your choice. For more information about the life of Mr. Childers or to sign the online guest book, please visit www.darstfuneralhome.com

Funeral: A memorial service was held on 2012-11-03 at Christ The King Lutheran Church.

Please enhance this tribute to Childers, Wayne by adding your condolences or memories. Click Here