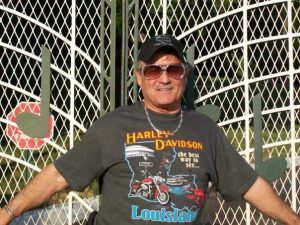 Celebrating the life of Darrell James “DJ” Louviere
Born on October 20, 1946 in Church Point, Louisiana, DJ died, unexpectedly, at the age of 75, on April 8, 2022. The Service will be held at Darst Funeral Home, 796 Russell Palmer Rd, Kingwood, TX, 77339, Thursday, April 14th, at 2:00 PM to 4:00 PM.
An incredible, loving Father, DJ was kind hearted and giving.  He was especially happy when each of his children was born.  DJ is survived by his children: Venus Louviere Dunn and her husband Keith Dunn of Seabrook, TX; Barbie Louviere currently of Destin, FL; Michelle Louviere of Lafayette, LA; Travis Louviere of Port Berry, LA; and Benjamin Fish of College Station, TX.  DJ was the cherished Godfather of Al Veronie Jr. and was beloved by numerous nephews and nieces.
Darrell “DJ” was preceded in death by his mother, Venus Veronie Louviere, and his father, Wilton Lee Louviere Sr.  He was predeceased by his brothers, Wilton Lee Louviere Jr. and Donald Ray Louviere.  DJ is survived by his sisters Linda Louviere Doucet of Eunice, LA, and Bonnie Louviere Saucier of Moss Bluff, LA, and his brother David Louviere of Kinder. DJ also leaves behind his constant companion, his beloved Yorkie, Duke, who survived the accident that took DJ’s life.
DJ served in the Navy 1964 – 1966.  For many years, he worked as a NCCER Pipefitter, Pipe fabricator, and Boilermaker in Chemical/Power Plants across United States.  At times, he worked through the Pipefitters Local out of Memphis.  DJ never wanted to retire. He enjoyed working. He enjoyed traveling and loved the Blue Ridge Mountains.  He lived in Tennessee a number of times, traveled to South Carolina, but, finally, settled in Livingston, Texas.
DJ loved to visit and BBQ with family and friends. DJ loved…Especially close his heart were the Veronie brothers, John Charles Veronie (JC), Joseph Roy Veronie (Joe/ Roy), and Allen Ray Veronie Sr. As they grew up as brothers together, and were extremely close.His very best friends, accordingly, were his daughter Barbie “Duke”, and, secondly, “Duke,” his loyal Yorkie. He had so many friends, almost too many to name. However, two special friends of note were Mike Hurd of Tennessee, who was like a brother to him, and, also, Allen Hasty of S. Carolina.
DJ was a Cajun, born and raised in Louisiana. He loved listening to Cajun French music, and, as all Cajuns, he loved to dance.  A special favorite on his song list was “La Grace du Ciel,” a French interpretation of Amazing Grace by the Les Amies Louisianaises.  There were other favorite artists and songs, as in anything Zydeco, Kenny Fife’s “Christmas in Heaven.” At the top of his list, for DJ was a die-hard Elvis Fan, was Elvis Aaron Presley’s “American Trilogy.” A frequent visitor to Graceland, he knew and could sing nearly every Elvis tune in clear imitation of Elvis’s voice.
DJ wasn’t a member of a specific church.  He visited many different Churches.  He began life as a Catholic, but, whether he attended a Catholic, Pentecostal, non-denominational or Baptist Church…if he felt the spirit of God there, he rejoiced in it. DJ was an amazing person; He loved God dearly and professed that love profoundly.   The world is lesser for his leaving.  For as we know…Our precious Lord always takes the best.

One condolence on “Darrell James Louviere”

Sorry for y’all lost. Prayers for all the family.