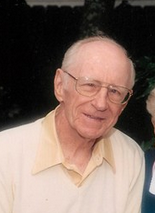 William John James Gardner was born on November, 4th 1923 in Queens, New York, the fifth of five children, to Mary Ann Coghlan Gardner (an Irish Immigrant) and Wallace Gardner Sr. He attended St. Pancras Elementary School and graduated from Franklin K. Lane High School. After World War II, during which he served in the Navy as a Petty Officer First Class on a Jeep Carrier in the Pacific, Bill attended Brooklyn Polytechnic and Hofstra Universities and attained 68 credits. He was proud to have served his country and be the only member of his family to go to college. Bill married his childhood sweetheart, Rosemary Bagley, to whom he was lovingly devoted for 60 years. Both he and Rosemary worked for the New York Telephone Company until they started a family. Rosemary stayed home to raise their four children while Bill continued his career at the New York Telephone Company for the next 30 years. Their life together began in an apartment in Elmhurst, NY. With the passing of Rosemary’s father, Bill and Rosemary returned to their hometown of Glendale, Queens for 11 years and started a family while supporting Rosemary’s mother. They purchased their first home in Mineola on Long Island where they continued to raise their family for the next 21 years. Bill and his wife retired to Venice, Florida in 1981 and enjoyed life surrounded by family and extended family. After 20 years they relocated to Fort Myers to live near their eldest son until 2007, after which they moved to Kingwood, Texas to be near their eldest daughter. There Bill lived the last 5 years of his life bicycling and walking miles upon miles to fill a void left by the passing of his best friend and wife who preceded him to the next life. The common thread that runs through all their moves was their love and desire to be near family.
Bill was blessed with a long life, 88 years, during which he was able to travel across the country to visit with family, vacation with friends, and view a few wonders of the world. He lived a life of faith as a devote Catholic and modeled honesty and integrity in all he did. His passing is preceded by that of his wife, Rosemary, as well as his sister, Katherine, and his three brothers, Joseph, Royal, and Wallace. He leaves behind his 4 children and their spouses: Diane and Ken Pagano of Kingwood, Texas, Gary and Tatta Gardner of Tampa, Florida, Susan Gardner and Peter Eisemann of Worcester, Massachusetts, and Richard and Tina Gardner of Markham, Ontario. Bill was blessed with eight grandchildren (Christopher, Scott, Linda, Chris, Henry, Audrey, Michael, Ashley) and five great grandchildren (Caroline, Jackson, Lucas, Benjamin, Dominick). Bill was also graced with an extended family of loving nieces, nephews and life-long friends, all of whom treasured him.
Visitation with the family will be 6-8 p.m. Friday, October 26, 2012 at Darst Funeral Home. A memorial Mass will be celebrated at 12:00 noon Saturday, October 27, 2012 at St. Martha’s Catholic Church. In lieu of flowers the family requests memorial contributions be made to one of Bill’s favorite charities:

Food for the Poor, Inc.
http://www.foodforthepoor.org/

Please enhance this tribute to Gardner, William J. by adding your condolences or memories. Click Here