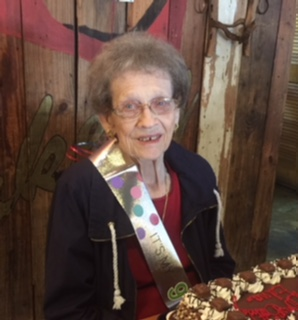 Surrounded by her family, Edna Glenna Garland, passed away on the morning of November 16th, 2017 in Humble, Texas.  A devoted mother, grandmother and wife, Edna was born in LaFollette, Tennessee on February 18th, 1927.  During Edna’s early years she lived with her parents and siblings at their home in LaFollette.  Before her marriage she was a Southern Bell telephone operator and was later employed by Tennessee Eastman during World War II in Oak Ridge, Tennessee.  After her marriage to Paul Garland, she moved to Detroit, Michigan where she was a homemaker while her husband built a successful trucking business. During this time, she bore four children with only Leonard and Stuart surviving her. In her latter working years with her husband, Edna helped him in his coin and paper money numismatic business attending shows across the United States.  After the death of her husband in 1999, Edna engaged in reading the bible, helping with church activities and communicating with her children and friends from church.  Due to health issues she moved to Kingwood, Texas in 2002 to live near her oldest son Leonard, and wife Marsha and her grandchildren. During this period Edna continued to attend church and discovered the unique pleasure of playing with her great-granddaughters Kaylee Grace Garland and Paige Marie Garland.  Edna was cared for during her last six years by her loving grandchild Carla Marie-Garland Jans.  Edna was extremely grateful for the love and care that she received while living out her golden years in Kingwood, Texas spending quality time with Leonard, Marsha, Carla, Calvin and her lovely great-granddaughters.  Edna was preceded in death by her parents, Alvis Lamb and Hannah Roxie Wilhoit; loving husband of 50 years, Paul E. Garland, who passed away in 1999.  Other relatives passing before Edna include children, Joe Dennis Garland and Jeffrey Brian Garland; sisters, Cleo Lamb of Sevierville, TN, Della Hunley of Clinton, TN and brothers, Elmer, Earl and Arvil. Edna is survived by her son, John Leonard Garland and his wife Marsha of Porter, Texas and son Stuart R. Garland of Knoxville, TN.  Others surviving her are sisters, Violet Ayers of Sevierville and Jean Rogers of Knoxville; grandchildren, Calvin Joseph Garland, Carla Marie-Garland Jans, Christopher Paul Garland and Amy Marie Johnson; numerous other family and a host of loving friends. She will be greatly missed.

Please enhance this tribute to Garland, Edna G by adding your condolences or memories. Click Here