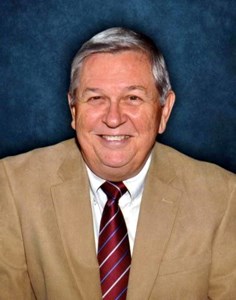 Larry James Golden, 74, beloved husband, father and grandfather, passed away peacefully on February 12, 2018 after a valiant four month fight with brain cancer and complications from surgery. Larry was born on January 24, 1944 in Columbia, SC to Jack and Mildred Golden. Larry’s father’s military career eventually took the family to Lawton, OK where Larry graduated from high school and met & married the love of his life, Carol Carter Golden.

Larry graduated from Oklahoma State University in 1968 with a Master’s Degree in Accounting. He then served as a 2nd Lieutenant in the US Army from 1969-1971.

After leaving the army, Larry’s career included time at Arthur Andersen, Texas Commerce Bank and Charter Oil Company. His responsibilities allowed him to travel the world, sparking a love of travel that he shared with his wife and children. Larry and Carol moved several times for his job, but in 1982 they settled in Kingwood, Texas – the community where they raised their family and considered their hometown.

Other noteworthy parts of his career include starting Geonet with his fellow entrepreneurs and serving as a consultant for other oil companies. After retirement, he got a real estate license and worked alongside Carol at RE/MAX for 2 years.  More recently, he worked at Kingwood Country Club as a Golf Marshal while perfecting his putting game.

Larry was proud to be a veteran, snow skier, loved playing golf with his foursome and walking his dogs with his friend. He also loved puzzles, reloading ammo, playing bridge with friends, reading a good thriller and watching movies.

But the turning point of Larry’s life happened in junior high when he chose to become a Christ follower. Because of that decision, Larry dedicated his life to teaching others about Jesus. He was an avid Bible student and taught Bible classes his entire adulthood. He was also a deacon and enjoyed serving his church. This service included helping plant the mission which became Woodridge Baptist Church. Larry also supported missions by going on mission trips and volunteering at Mission Northeast weekly since 2009.

Please enhance this tribute to Golden, Larry J by adding your condolences or memories. Click Here