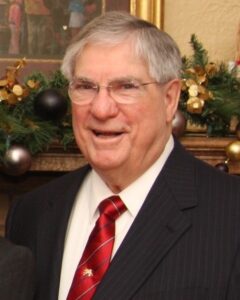 At the height of the Great Depression, John Henry Hensley was born on May 17, 1932 in Yellow Mound, Eastland County, Texas to William Elnos and Roxie Lee Hensley. He was the third of seven children. Having a rough childhood, John had to grow up quickly. His father took him out of school when he was in the 8th grade to begin working tough manual labor jobs, often working with his Dad’s team of horses. John quickly realized he needed to return to school and finish his education, even if it meant supporting himself.

After graduating from Eastland High School in 1950, John Hensley joined the United States Air Force. He recalled how his fellow recruits often complained about Basic Training, but John thought he was on “Easy Street,” getting three hot meals a day and having good clothes and shoes. While serving in the Air Force at Sheppard Air Force Base in Wichita Falls as an Airplane Mechanic, John would meet the love of his life, Chrisanta (C. C.) Salinas. Owning one of the few cars on the base, John drove three of his buddies to TSCW (Texas State College for Women), now TWU, in Denton because he heard that was a good place to meet women. It was at the Junior dorm that he met his future wife. John and C. C. married on July 8,1953 in Falfurrias, Texas at Sacred Heart Catholic Church.

After John completed his time in the Air Force in 1954, John and C. C. settled down in Falfurrias, Texas. They had four children: John Henry Hensley, Jr. (1954), Michael William Hensley (1956), Dennis Morris Hensley (1958) and Theresa Ann Hensley (1959). John began school at Texas A&I in Kingsville. One day on his return trip to Falfurrias, he stopped at the Seeligson gas plant in Premont. Although the Plant was closed, he found the Plant Foreman there, told him he was just out of the Air Force and needed a job. The Plant Foreman felt his arm, saying “you look strong”, and told him to start work on Monday. Thus began John Hensley’s 40-plus year career with Mobil Oil. John took an Educational leave from work to finish his degree in Mechanical Engineering at Texas A&M University. Together John and C. C. raised their four children (all under the age of 6) with John going to school full-time, and living on only $650 a month from his G.I. Bill. The family moved often across Texas as John’s career progressed with Mobil Oil. In 1969, the family finally settled in Houston, the place all the family claimed as home.

In their 69 years of marriage, John and C. C. certainly modeled the true meaning of family, not only with their countless family reunions and parties with their siblings, but also celebrating every special occasion with their children. Every family reunion was highlighted by a marathon 42 Tournament. John loved to gamble. It didn’t matter if it was hustling pool in his early days, or playing poker to subsidize those early family years. John would often host poker games in his home, something Theresa loved because she would serve as hostess, fixing drinks and sandwiches for tips. John and C. C. often vacationed where casinos were involved: Las Vegas, Reno, Lake Tahoe, Atlantic City and Aruba to name a few. John even won a Black Jack Invitational Tournament at Planet Hollywood in Las Vegas. He parlayed his $50,000 prize money into six additional trips to Las Vegas.

One of the great highlights of his life was at the age of 69 taking C. C. and his son, John on a 17-day tour of Italy. This was not your typical tour group trip, but rather one of three pilgrims lugging their own suitcases across Italy, jumping on and off trains as they made their way through Milan, Venice, Florence, Assisi, Rome and Paris. The other great highlight was when John received the sacraments of Baptism, Eucharist, Confirmation and Anointing of the Sick at his home in Kingwood surrounded by his family.

John Hensley was a true fighter, beating cancer twice. John died peacefully at his home on Holy Thursday morning, April 14, 2022 surrounded by his family and care givers. The family greatly appreciates the many years of service given by his caretaker and friend, Thelma Cummock; as well as, the Atria Care Team and Bayou City Hospice. John Hensley epitomized America’s Greatest Generation.

Family and friends are encouraged to leave a note or story online at darstfuneralhome.com. In lieu of flowers, donations can be made to the Dominican Sisters of Houston, 6501 Almeda Road, Houston, TX 77021 or online at domhou.org

One condolence on “John Henry Hensley”

As Christopher’s brother-in-law, My heart goes out to the Hensley family during these difficult times. I had the absolute pleasure of spending time with John Henry and C. C. on multiple Holiday get togethers, and he was a true class act and a wonderful, gentle and kind-hearted man with a sense of humor that is unmatched. And I am happy to say he crushed me in a family poker game at Theresa’s home on one of these get togethers. He will be greatly missed, and my thoughts and prayers go out to everyone in the family.