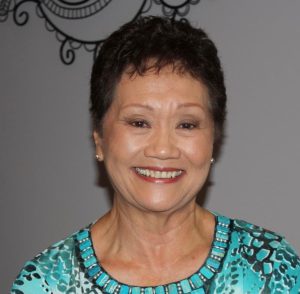 Judy was born on April 27, 1943, in Port-of-Spain, Trinidad, British West Indies, where she lived until December 1963.  Her parents were Usman Ahing Marchcok and Sylvia Poontip Marchock.  She was the second of four children.  She attended and graduated Holy Name Covent in Trinidad.  She met and married Douglas Sessions, who was stationed on the island in the U.S. Navy, December 8, 1962 at St. Ann’s Catholic Church.

Judy moved and lived in Alabama until the family relocated to Texas in 1981 where she was a faithful member of the Lake Houston Church of Christ.  She loved and was loved by her immediate family, as well as her church family.  She enjoyed sharing stories of her life with many, and she will always be remembered by her infectious laughter.

A few of her favorite hymns were; I’ll Fly Away, When the Roll is Called Up Yonder, and When the Ring Those Golden Bells for You and Me.

Judy worked hard alongside her husband building a very successful local business in Humble.  There they shared many wonderful memories spending tie supporting each other in life and work.

She was a wonderful wife and mother to three daughters.  Later in life, she became the grandmother of thirteen grandchildren and two great grandchildren.  It was her dream to become a grandmother, and she was truly blessed.

She was a very talented seamstress, as many knew, and had been adored for gifting many handmade baby gifts, dolls and clothing.

Judy was preceded in death by her parents, Sylvia and Ahing Marchock.  Her surviving relatives are her husband of 59 years, Douglas Sessions, her daughters ad their spouses; Gayor and Kyle Taylor, Karen and Chuck Birt, and Carole and James Marti.  She is survived by her grandchildren; Juliet, Jacob, Jenna, Ashley (Shae Lanier), Tiffany (Reece Mobly), Shelby, Marie, Maycee, Charlee, Victoria, James Douglas (Kelsay), Spencer (Kaylee), and Travis and her great-grandchildren; Everett ad Quin.  She is also survived by her three siblings; Ann Shalongo, Ronald Marchock, and Michael Marchock ad various other nieces and nephews.

Judy’s ashes have been interred at Veterans Memorial Cemetery.

She will forever live in our hearts and memories.

I have fought the good fight, I have finished the race, I have kept the faith.  Now there is in store for me the crown of righteousness, which the Lord, the righteous Judge, will award me on the day- and not only to me, but also to all who have longed for his appearing. 2 Timothy 4:7-8

One condolence on “Judy Marion Sessions”

Judy was a beautiful lady and loved by all. We will miss her dearly.