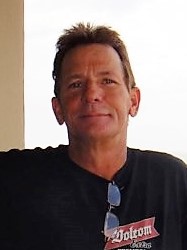 Stephen Wayne King entered eternal rest on Sunday, April 23, 2017.  He is survived by his parents Tommie and Rena King.  Three siblings:  Jennifer, Tommy and Misty.  Numerous cousins of which he greatly adored.  Stephen’s greatest accomplishments were his children, Sarah Louise and Kaelyn Ruth King.  Sarah gave Stephen his greatest inheritance of his grandchildren, Julia and Carter.  He is survived of his wife of 12 years Lesa King who gave him a daughter immediately following breast cancer.  This was a marriage of stamina and having survived many trials.  With each trial, we dug our heels in and stood strong and grew closer during those trials. Stephen had a love for motorcycles, jet skis and Rock-n-Roll.  He was a true Led Zeppelin fan and Lesa and Stephen fell in love to Led Zeppelin’s Physical Graffiti. Having conceived Kaelyn in love, she meant the world to him. Sarah Louise was another gift from Heaven whom he adored. He loved the work that he did as Chief Electrician.  This was his passion. With an abundance of love, your wife, your brother and sisters; your Mom and Dad, your children, and your grandchildren, both biological and those of your spouse whom you treated as your own, your step-son Bryan, Brooklyn and Bryanna.  We will see you again.

From the words of the Psalmist:  Psalm 48:14 “For this God is our God for ever and ever; he will be our guide even to the end.”

To view and submit images or to sign the guestbook, visit http://www.mem.com/73798

Funeral: A memorial service was held on 2017-04-28 at Darst Funeral Home. Garden attire suggested as service will take place outside in the garden.

Please enhance this tribute to King, Stephen W by adding your condolences or memories. Click Here

A visitation will be held for Mrs. Gillow on Wednesday, March 24, 2021 from 4pm until 6 pm at Darst Funeral Home. A Funeral Mass will be held at St. Martha's Catholic Church on Thursday, March 25, 2021 at 11:30 am, with interment to follow at Houston National Cemetery.