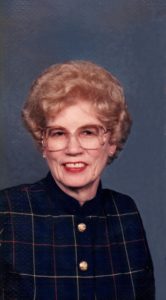 Velda Lorene Cook Mainarich,   beloved wife, mother, and grandmother,   passed into the arms of her Lord on August 25, 2016.  She was born in Little, Oklahoma on September 1, 1924 and grew up in Ada, Oklahoma.  Velda worked in Civil Service in the Signal Corps at Bergstrom Air Force Base in Austin Texas, where she met and married Walter Mainarich.  On June 20, 1948, Velda and Walt were married, beginning a happy marriage that lasted 68 years and eventually produced two daughters, Sharon Gail and Judy Carol.  Velda was enthusiastic, caring, and productive in whatever she undertook.  She served as a home room mom many times for both daughters, even sewing individual Christmas stockings with names on them for each class member and embroidering students’ signatures on a table cloth presented to the teacher. As a devoted Christian who loved the Lord, Velda joined and became church hostess for Forest Cove Baptist Church, which ultimately became Second Baptist Church, North Campus.  She helped then pastor, James Ray Roach with Wednesday night suppers, first by purchasing and cooking food for the dinners and later by hiring a cook.   At home, Velda was a talented and active hobbyist for many years.  She did ceramics, sewed draperies for both daughters’ houses as well as quilting, embroidering, and making beautiful quilts for both of her grandchildren.  One of her most outstanding gifts was that of hospitality, and she was a warm and welcoming hostess her whole life. She dearly loved her family and is survived by her husband Walter, daughters Sharon Gail Mainarich and Judy Ragsdale (husband David), grandchildren Lauren Michelle Ragsdale and Michael Scott Ragsdale, and many nieces and nephews.