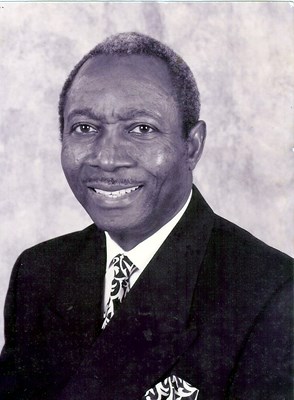 On June 1, 1938, Joseph Saint-Jean, was born in Cap Haitian to Mr. Jean-Pierre Saint-Jean and Mrs. Marie-Louis Nelson Saint-Jean. He was the youngest and the only surviving of four children. He grew up in Cap Haitian and attended the Seventh-day Adventist Primary School of the town although he wasn’t a Seventh-day Adventist Christian yet. At the end of his primary education he attended Oswald Durand a Secondary Institution for two years and he was forced to stop school for financial reasons. Three years later, on November 18, 1957, at the age of 19, he accepted Jesus Christ as his personal Savior. He was also introduced to canvassing.

On June 1, 1938, Joseph Saint-Jean, was born in Cap Haitian to Mr. Jean-Pierre Saint-Jean and Mrs. Marie-Louis Nelson Saint-Jean. He was the youngest and the only surviving of four children. He grew up in Cap Haitian and attended the Seventh-day Adventist Primary School of the town although he wasn’t a Seventh-day Adventist Christian yet. At the end of his primary education he attended Oswald Durand a Secondary Institution for two years and he was forced to stop school for financial reasons. Three years later, on November 18, 1957, at the age of 19, he accepted Jesus Christ as his personal Savior. He was also introduced to canvassing by the late Pastor Lamartine Honore who inspired him and showed him and many other col porters that they can reach their educational goals through canvassing.

In 1961 four years after accepting Jesus as his personal Savior, Joseph was accepted as a student in the College Adventiste in Haiti, where he received his Associates Degree in Theology. Soon after, he was sent to the Southern Mission as an Assistant Pastor under the leadership of the late Pastor/Evangelist Naason B. Prosper. Where he assisted in many great crusades where hundreds of souls were won for the Lord. During that time, Joseph was among the Pastors recruited by the Franco-Haitian Union to support American Evangelist W. W. Fordham by visiting, studying and helping people stand for the Lord.

At the end of the crusade Joseph received the call from the Union office to become the Dean of the Men at the College Adventiste in Haiti. With his start date scheduled for September 1968, he married his college sweetheart and soul mate until the end, the former Marie Emmanuella Charles on July 9, 1968. Together they had four daughters, Farah Saint-Jean, Dr. Norma Saint-Jean Shields, Carine Saint-Jean Allen, and Margarett Saint-Jean.

Pastor Saint-Jean was the Dean of Men’s Dorm and the English Teacher in the Seminary from 1968 to 1973. After five years of service to College Adventiste of Haiti, in 1973 he left Haiti with his wife and their two daughters Farah and Norma to Jamaica, West Indies College. In 1975 he graduated with a Bachelors in Theology and moved to Canada where he went to Canvass. After less than one year there he joined his wife who was in New York where she gave birth to their third daughter Carine. He was in New York for two years diligently working towards his goal of attending Andrews University. Then once again he received a call from the Franco Haitian Union to go to Martinque where they needed a Dean of Men for the Martinique Guyano Antilles College of Rama. There, he stayed for three years to help stabilize the Men’s Dorm as well as teach Bible courses which helped to establish a church in Monesie. Upon completing his assignment in 1980, he left Martinique with his family for Andrews University. From 1980-1984 he studied and received his Masters of Education in School Administration in 1982 as well as his second Masters in Psychology in 1984.

At the end of 1984 he applied for his PH.D program at Michigan State University where although accepted into the program, he chose to accept a position with the Board of Education in New York City to teach Middle School for Academic year 1984-1985 as a Special Education Teacher. This would be the only year he’d spend with the Board of Education, as in October 1985 he was called to the Northeastern Conference of Seventh-day Adventist to Pastor Maranatha French SDA Church in Queens NY which he lead from October 1985- February 1990. Then he went to Horeb French Speaking SDA Church from February 1990-August 1995. Thereafter, he served at Bethanie French Speaking SDA Church from August 1995- March 1997.

Joseph Saint-Jean had a passion for youth and family ministries and under his leadership these two departments flourished. Evangelism was another passion for Pastor Saint-Jean from the beginning of his ministry he organized crusades whereby through the power of the Holy Spirit he baptized hundreds upon hundreds of souls for Christ. His ministry at Bethanie French Church was cut short however, as he was elected to fill the interim position of Haitian Coordinator at Northeastern Conference. He was reelected to this position for two consecutive terms where he served from 1997-2004 for a total of seven years as Coordinator of the Haitian Community. In this capacity he oversaw the 45 Franco-Haitian churches their Pastors and their constituents of 11,000 members in the Northeastern Conference across the Tri-State area. After serving his mandate he informed his constituents that he would no longer seek reelection and returned to field ministry at Morija French SDA church and Bethel French SDA from January 2005- February 2009 until he retired from Northeastern Conference.

Altogether, Pastor Saint-Jean had a very fruitful ministry in Haiti as well as abroad. He was a servant of God, a strong believer of Gods promises and he served the Seventh-day Adventist Church for over 40 years. He had a saying that when facing an apparently impossible venture “If I start to doubt God at this stage of my life then he will let me down for a reason.” These words would come to have deeper meaning for Pastor Saint-Jean as towards the end of his ministry and into his retirement as he continued to endure trying health crises. Yet through it all he trusted God and held fast to his unchanging hands. With every health scare he rebounded and came back more faithful and praising God for His mercies and faithfulness towards him.
Joseph Saint-Jean was a living walking miracle and he remained faithful through his experiences to God.

Last January 2014, was no different when Joseph Saint-Jean endured a major illness that left him weak and utterly debilitated. But God in His unfailing love saved him and rose him up. And through it all he kept singing and praising and thanking God. The Doctors who cared for him were amazed by his resilience and he was called bionic by some and by others a miracle as he only had a 5% chance of survival. Yet he survived, strived and progressed through rehabilitation with leaps and bounds. He was nothing short of a miracle, a walking, talking miracle and we all knew it. This February, 2015 his health was being challenged once again and as in times past, but this time around he was not able to stand. On Saturday March 7, 2015 The Lord in His mercy called His man servant Pastor Saint-Jean to rest. He will be sorely missed. Pastor Joseph Saint-Jean is survived by: his beloved wife of almost 47 years Marie Emmanuella Saint-Jean.

1 Thessalonians 4:14-18
14 13 Brothers and sisters, we do not want you to be uninformed about those who sleep in death, so that you do not grieve like the rest of mankind, who have no hope. 14 For we believe that Jesus died and rose again, and so we believe that God will bring with Jesus those who have fallen asleep in him.18 Therefore encourage one another with these words.

To view and submit images or to sign the guestbook, visit http://www.mem.com/6362766

Please enhance this tribute to Saint-Jean, Joseph S by adding your condolences or memories. Click Here