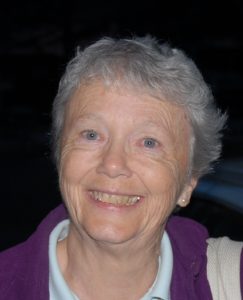 Mrs Sargent was born on October 19, 1933 in Fort Worth, Texas, the daughter of Myrtle Ann Newbill and Charles Edward Black.  She attended Pollytechnic High school in Ft. Worth, Texas graduating in 1951 at the top of her class.  She married her high school sweetheart William M. Sargent Jr. in 1952 and settled in Pampa Texas.  She earned an undergraduate in education from West Texas A&M and a Masters of Library Sciences from Sam Houston State.  She taught English at Pampa High school and later at various schools in the Kingwood Texas area.  While teaching at Pampa High, she coached the debating team which won the National Forensic League’s National Debating Title and was congratulated on her victory by Texas governor Preston Smith. She and William retired to College Station in 1996 and were members of the A&M Methodist Church.  She is survived by two sons, William Sargent of Beijing, China and James Sargent of Kingwood, Texas and four granddaughters, Lindsey Sargent of Midland, Texas, Kirsten Sargent of Denver, Colorado, Hana Sargent and Mia Sargent of Beijing, China.