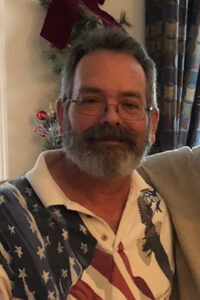 On Sunday, January 2, 2022, Terence “Terry” Alan Strauss was called home at the age of 60. The world has lost a great husband, father, grandfather, brother, uncle and friend.

Terry was born on March 5, 1961, to Ray and Darlene Strauss at Loring Air Force Base in Limestone, Maine. As a child Terry grew up in multiple locations in the United States and overseas. During this time, he enjoyed playing baseball, riding horses and competed in swimming. He especially loved camping trips to the Montana Mountains and going fishing with his mom.

Prior to his passing, Terry was a dedicated employee with The Home Depot. Over multiple years of employment, he managed multiple departments within the company and eventually promoted to the position as the Human Resources Manager of the Humble location. Terry was a good friend to all and a volunteer for his community. Recently, Terry volunteered his time to assist with home rebuilding projects for flood victims in Louisiana.

If you asked Terry, his greatest accomplishment was not his service in the military or his career. It was being a husband, father and grandfather. Terry met his wife Holly many years ago but their paths did not cross again until they were reconnected through Facebook and were married June 11, 2011. Terry was proud and honored to be a patriarch, husband, father and grandfather to our large family. He has been a major presence in the lives of his children and grandchildren and to all his family. Standing in for his father, Terry graciously pinned his nephew Alex’s Air Force Pilot Wings.

Terry was preceded in death by his father Raymond Strauss and mother Darlene Amdahl as well as his grandparents.

The Strauss Family would like to express their gratitude for the nurses Kim, Beverly, Chris, and most of all Stephanie from Reliant at Home Hospice for the compassionate care they provided to Terry and the family.

Friends and members of the community are invited to join the Strauss family on Wednesday January 12, 2022, from 5-9pm for a celebration of life service. Join us at the Veterans of Foreign Wars (VFW) located at 24411 Cunningham Dr, Porter, TX 77365.

Our deepest sympathy to the family for the loss of this wonderful man. We continue to send our love and prayers for peace during these times of sorrow.

Prayers and Thoughts are with all of you during this difficult time. Joyce Sterling

My condolences to the family, I have many fond memories of working with Terry at Home Depot, he will be missed.

My heart truly hurts for Holly and the family. Terry was a huge part of my son, Dustin’s life and he loved them like family. He will be greatly missed. He truly was an amazing man, husband, father and grandfather and it was an honor to know him.

Terry was one of a kind. He is truly missed at HD.
Hugs and prayers to his family and friends.🙏🏻🙏🏻♥️

opens in a new windowGoogle Reviews

opens in a new window