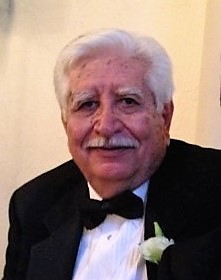 George M. Vaca, 77, of Kingwood, TX. crossed over to be with our Lord Jesus on Friday, February 17th at 4:03 am surrounded by family.
He was preceded in death by his father, Jesus Vaca, mother Anita Ramos Vaca, and his siblings, Anna Vaca Contreras, Raul Vaca, Rosa Vaca Munoz, Lucilla Vaca, Benjamin Vaca and Librada Vaca.

George was born in San Bernardino, California on February 22, 1939 where he attended Catholic school and learned a strong work ethic by helping out in the family dry cleaning & tailoring business. The skills he learned there would serve him the rest of his life as a talented mechanic and general “fix-it” man. He loved to tinker around with just about anything he could find and his “eagle eye” for detail earned him a reputation for perfection.

He entered the US Army Reserves with his parents’ permission at the age of 16 and proudly served his country for a combined 38 years in the Army Reserves, the United States Air Force and the New Mexico Air National Guard where he ultimately retired with the rank of Master Sargent as part of the 150th Fighter Group, affectionately known as the “Tacos”. He had a passion for anything Military and truly loved his job working on the flight line.

In his younger years he enjoyed playing soccer and salsa dancing, especially with his favorite salsa partner, his beautiful bride. In his retirement years he enjoyed watching a good game, fishing, collecting guns, and eating some tasty grub. He loved a good meal and was always ready to tell you all about it. His greatest love was his grandchildren and attending their many activities over the years brought him much joy. He enjoyed church, serving as Vice Commander of the American Legion, and sharing a laugh with any and everyone. He was a great storyteller and had an amazingly sharp wit that endeared him to many. He also became as a father to those who needed the wisdom and kindness that a father provides. He had a servant’s heart and was always willing to lend a helping hand to anyone who asked and even those who didn’t. This is the legacy he leaves behind. A legacy of love for his family, his friends, and his neighbors.

He is survived by his wife of 54 years Marina, his sons Orlando & Eduardo, his daughter Diana Vaca Abbott and Son-in-law Gregory Abbott, his grandchildren Matthew Abbott and his wife Jaci Bryan Abbott, and Marlena Abbott, and many more family and friends who all love him very much.

To view and submit images or to sign the guestbook, visit http://www.mem.com/73636

Please enhance this tribute to Vaca, George M by adding your condolences or memories. Click Here