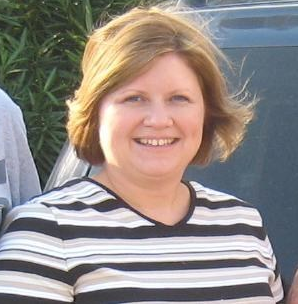 Kim was the daughter of Barbara Anne Storey and William Donald Storey, and the sister of Michael Storey of Nederland, Texas and Mark Storey of Beaumont, Texas. She is survived by her husband, Kevin, and her two sons, Drew, 16, and John, 13, all of Kingwood.
Kim graduated magna cum laude from Nederland High School in 1983, where she was on the swim team and played trumpet in the band. She went on to get a B.S. in Accounting from Lamar University, where she was a member of Beta Chi Delta sorority and Beta Alpha Psi honor society.
Kim worked as an accountant for several years, starting with Arthur Andersen, and then for private companies including TexCon Oil and Gas, Cal-Dive International, Inc., and most recently, Jack Rowland and Associates in Kingwood.
While in high school, Kim worked part-time at Putt Putt Golf Course, where she met Kevin Vincent; they married on September 5, 1992.
While the days Kim was with us were much too few, we were all blessed by her friendship, her humor, and her compassion.

All are invited to a visitation for Kim on Monday evening from 6-8PM at Darst Funeral Home, 796 Russell Palmer Road, Kingwood, Texas.
A memorial service for Kim will be held at 10:30 a.m., Tuesday, October 30, at the Kingwood Church of Christ, 2901 Woodland Hills Drive, Humble, Texas, with internment to follow at Oak Bluff Memorial Park, 101 Block Street, Port Neches, Texas.
In lieu of flowers, the family has requested contributions be made to the “Aim at Melanoma” organization, or the M.D. Anderson Cancer Center. www.melanoma.org www.mdanderson.org

Please enhance this tribute to Vincent, Kimberly Anne by adding your condolences or memories. Click Here

A Celebration of Life will be held for Troy Greene on Saturday, October 2, 2021 in the Darst Funeral Home Gardens at 11 am.