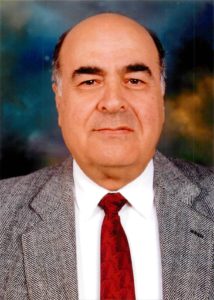 Dr. Samir Youssef Wakim was born on December 23, 1935 in Mieh Mieh, Lebanon, a small village overlooking the biblical city of Sidon, to Youssef Georges Wakim and Miriam Andraos Wakim.  After graduating from The Gerard Institute of Sidon in 1954, he trained as a commercial pilot and flew for Lufthansa, Sabena and Lebanese International Airways.

In 1959, Samir married his wife of 58 years Latifee Wakim and honeymooned in Europe.  A year later they had a daughter named Milka, who died shortly after birth.  In 1965, their son Samuel was born and a year later, seeking better opportunities, the family moved as legal immigrants to the United States.  In 1967, their second son Alan was born.

Dr. Wakim worked and supported the family while he attended Oklahoma Baptist University earning his Bachelors in Business Administration.  Eventually he would receive a Masters in French and a Ph.D. in Political Science.  During this time he devoted his life to our Lord and Savior Jesus Christ and became an Ordained Minister with the Southern Baptist Church.  In 1974, he returned to aviation and joined Trans Mediterranean Airlines and moved the family to Houston, Texas.  For the next 36 years he worked in the industry he loved most: aviation. In 2010, while working with Gulf Air, a debilitating stroke ended his career and changed his life.

Samir spoke six different languages and enjoyed discussing Middle East politics. He was an athlete while a student and brought his love for the game of soccer to our shores. He loved to entertain people with his jokes and funny stories.  He and his wife had frequent parties in their home with his wife feeding everyone with her delicious Lebanese food.  They loved to travel, having circled the world over numerous times.  He believed very strongly in the gospel of Christ.  His charming laugh and scholarly wisdom will be greatly missed.

In many ways, Dr. Wakim’s impact will be felt for many years to come. One example of his impact is in the college sports world. In 1971, during his time at North Texas State University, as part of his earning permanent residency in the United States, he agreed to develop a new sports program for the University. The sport was soccer and the club he created and coached became a Varsity sport several years later. By 1992, The University of North Texas Soccer program was one of the winningest programs in the United States and had recorded 22 straight seasons with a winning record.

Dr. Wakim is survived by his wife Latifee Wakim of Kingwood, Texas, his older son Dr. Samuel S. Wakim and his wife Hannah Wakim of Granger, Indiana, his younger son Alan Wakim and his wife Jennifer Molleda-Wakim of Houston, Texas, his four grandchildren in Indiana: Rita, David, Michael and Luke, a sister Therese Nahed of Mieh Mieh, Lebanon and numerous nephews and nieces around the world.